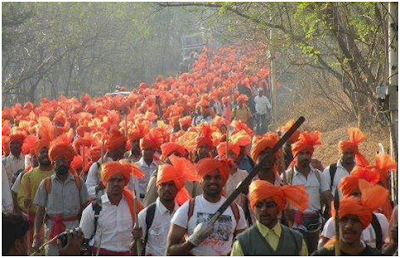 NEW DELHI: A joint expose’ on film by investigative media Cobra Post and Gulail, has revealed that the recent spate of acts of violence from Muzaffarnagar in western Uttar Pradesh to Mangalore in Karnataka, have been meticulously organised by a network of kindred Hindutva organisations.

The usual suspects, members of the RSS, BJP, Hindu Mahasabha, Hindu Jagaran Manch, Swadeshi Jagaran Manch, and Vishwa Hindu parishad (VHP) are captured on hidden camera used by reporters of Cobra Post and Gulail. These short ‘sting’ interviews were shown to the media in Delhi at the Press Club.

‘Operation Juliet’, the name given to the collaborative ‘sting’, was primarily done in Western UP and Southern cities of Mangalore and Ernakulam, among many others. Shazia Nigar, reporter for Gulail, met various foot soldiers and lieutenants of the aforementioned organizations who can be seen boasting of their mettle for fomenting riots, making incendiary speeches, and other methods used to polarise religious communities.

‘Love Jihad’, is demonstrated to be one such issue used by the perpetrators to generate communal responses. The myth of ‘love jihad’ is invariably subscribed by all the people with whom the reporter talked.

The hidden camera has recorded the responses of colourful dramatis personae which include Suresh Rana, MLA, BJP; Hukum Singh, MP, BJP; Sanjeev Kumar Baliyan, MOS-Minister of Agriculture, BJP; Sanjay Aggarwal, leader, BJP; Umesh Malik, leader, BJP; and Sangeet Som, MLA, BJP, who was again in the news recently for a visit to Dadri where a person was lynched on the basis of rumours.

“I have myself brought back more than 50 girls to their families... a girl is a girl, she changes her tune with the circumstances. If she doesn’t change her decision to come back to her family then we take her aside and tell her to come back else her father will die, her mother too, and her brother won’t be able to sit in the society… Mostly they assent without us having to resort to force,” says Suresh Rana, BJP, MLA, about the campaign run by him to counter Love Jihad.

Hukum Singh informs the reporter that the Muslim boys change their names to Sonu, Monu, Ashu, etc to fox Hindu girls into believing that they too are Hindus. “They also wear’ Kaleva’ (a red thread won by Hindus on wrist), and wait outside the colleges and institutions for girls,” he says. Singh admits on camera about his role in “rescuing” many Hindu girls. Sanjay Agarwal of BJP, who has recently contented for Mayoral elections, reveals that even advocates and police help them in getting the girls back to their parents, because they too are Hindus.

The film also shows an interview with Shiv Kumar, founder of Shri Krishna Sena, who confesses being gloomy on the days when he was not able to kill. Suresh Rana claimed that the BJP supported him throughout his lofty endeavors.

‘Operation Juliet’ unearths a nether world of Hindutva infantrymen and cavalry, who carry its flag high and are prepared to go to any length to restore “past glory.”

It’s the same Som and Rana and Baliyan who admit an active role in the Muzaffarnagar violence on camera, who are now seen roaming in Dadri,and discounting the murder of Mohammad Akhlaq as an aberration and little more than a law and order issue. The recorded interviews constitute a castigating comment that needs high level investigation and action.